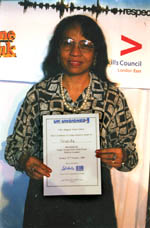 East Riding College music student Anarita Smith entered and won the first heat for the UK Unsigned Showcase on 3 June 2006 held at the Winter Garden, Cleethorpes. Anarita then went onto perform in the semi final in London in October. Anarita performed 2 songs which she had written herself and played the guitar in the Singer/Songwriter category.

The final heat took place on 26 November again in London, Anarita performed her song ?Away from you? dedicated to the Soldiers of the Peacekeeping Forces in Iraq and Afganistan.

Anarita, originally from Jakarta, has lived in Beverley for 17 years, has always had a passion for music. She is currently studying on a 1 year Access to Music programme at East Riding College?s St James Centre in Hull.

Previously Anarita sang a number of her own songs in a concert at the Hull City Hall in aid of the Tsunami and Unicef in front of 1100 people. Anarite was interviewed by Yorkshire Television for the Calendar programme.

Anarita said ?I wanted to support the charities and help those who are suffering. Music is my passion and by performing my songs others could share my interest, whilst contributing to the fund raising at the same time?.