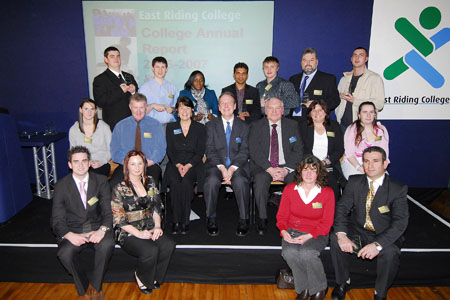 Derek Branton, Principal, gave the College?s annual report for 2006-2007. The College had met the ambitious targets it had set itself in increasing recruitment, raising standards and engaging employers across the East Riding. The College?s success rates now place it within the top quarter of best performing colleges in England. He said the high standards being achieved at the College had been underlined by the very good recent inspection reports received by Ofsted for further education provision, and the Quality Assurance Agency for higher education provision. He commented that both of these national quality watchdogs had commended the College for the high standard of teaching and learning.

He spoke of the College?s plans to completely rebuild its estate with new state of the art learning facilities in Bridlington and Beverley. The Principal stated the College was on track to becoming an outstanding college, housed in the best accommodation.

21 students were presented with an Award of Merit. The students were nominated from each of the College?s 11 curriculum areas, which included: Catering and Hospitality, Early Years and Care, Art, Design, Media and Music, Construction and Engineering. The qualifications studied ranged from NVQs to National Certificates, Diplomas and Foundation Degrees.

All the student awards presented at the ceremony were sponsored by local employers, many of whom attended the event. The College was delighted that there has been a significant increase in links forged with local businesses and thanked the sponsors for their support. The work that the College is undertaking with employers has been expanding rapidly and this year 3,300 students have been directly sponsored by employers to undertake skills development programmes at the College.

Steve Tomlinson, Director of Employer Engagement and Marketing, said: ?The College is delighted to congratulate the award winners on their successful achievements. We also thank the tutors for their commitment and support for individual learners in bringing about the high success rates. We give the learners our best wishes for their future plans, either in progressing with their studies or in their chosen employment?.