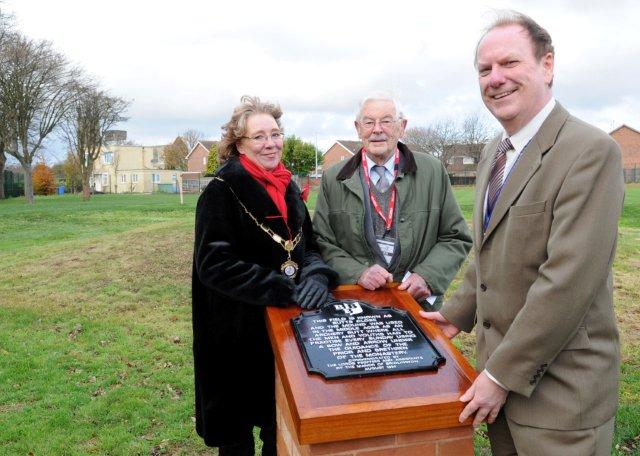 Plaques outlining their history were cleaned, with one being displayed on part of the main building and the other placed on a plinth which was designed and built by construction students Marie Braithwaite, Brendon Acton and Mitchell Wedge.
The ceremony was attended by Mayor of Bridlington Shelagh Finlay and members of the Lords Feoffees of the Manor of Bridlington, who originally donated the plaques in 1994, with the dedication read out by Chief Lord Michael Horrox.
The Lords Feoffees were established in 1636 and acted in a similar way to a local authority until the mid-1800s. They now own and manage a substantial amount of property in the town and use the income for philanthropic purposes, such as study bursaries.

Principal Derek Branton said: "The archery butts are a reminder of the rich history of this part of Bridlington and we are proud that they are an integral part of the landscape of the new college campus.
"The re-dedication was an opportunity to observe our heritage while at the same time celebrating the final phase in the development of our modern campus.

Mr Horrox said: "I was very pleased that the Lords Feoffees have been able to be involved in, look after and improve an important historic feature in the town."

The field on which the butts are located, a practising ground for archery in the middle ages, is known as Butts Close by royal decree of King Edward III in 1337.
The two mounds are 100 yards apart and the men of Bridlington would fire arrows into targets placed on top of the butts. King Henry V in 1413 and King Edward IV in 1461 also ordered that archery should be practised on the field after church on Sundays, though all other forms of sport were forbidden.
The butts were in the enclosure of the Priory monastery and the canons and monks also had to practise there.

A photograph of the ceremony is available. For more information, call Matthew Croshaw, marketing and communications manager, on 01482 306612 or email [email protected]