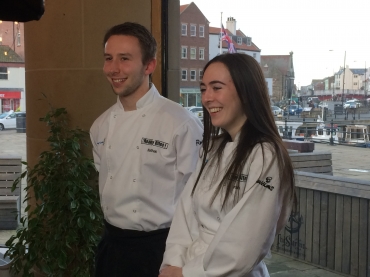 The cookery competition pits students from across the region against each other in heats held in some of the best restaurants north and south of the Humber, all as dedicated to nurturing local talent as they are to sourcing local suppliers and ingredients. Chef Steven Bennett presents, having spent 5 years as owner and Chef Patron of The Comfy Duck, helping put the region on the gastronomy map. Steven is joined on the judging panel by BBC presenter Blair Jacobs and para-cyclist Liz McTernan.

Both students competed against each other at a heat held at Tapsaya in Hull where they completed a ‘technical challenge’, given only one hour to prepare and one hour to cook a recipe chosen for them as well as inventing a new dish to accompany it.

Nathan who works at the Wellington Inn in Lund, near Driffield won the opportunity to represent East Riding College in the semi-final, broadcast on Thursday 26 April. Nathan said, “We had to cook a murgh tariwala which is a curry dish, which I’d never heard of or cooked before. They said it wasn’t quite saucy enough but loved the flavours. I did a bread and butter pudding with a spicy twist to accompany it, which was a risk but it paid off.  It went down really well – the owner even came back for seconds and the crew liked it too! The only thing is I improvised on the day so I don’t even have the recipe.  It was a great experience, working in different kitchens with other chefs and cooking different types of cuisine.”

The semis were held in the renowned The Star Inn the Harbour in Whitby, owned by Michelin-starred chef Andrew Pern.

Nathan said, “We had to cook a smoked mackerel croquette and a sea trout mousse.  My dessert was a lemon tart.  Cooking in a professional kitchen can be pressurising but cooking in front of a camera crew takes it to another level!”

David Leaf, Chef Lecturer at East Riding College said, “Both Evie and Nathan have done us proud, they’re hard workers and performed admirably under the pressure of the challenges they were set.  I’m proud of the skills and creativity they’ve shown during the competition, demonstrating that if they continue to show these levels of dedication, they should go far in the business.”

Nathan’s semi-final will be broadcast on Estuary TV (Freeview 7 and Virgin Media 159) at 8.30pm on Thursday, and then be available on Estuary TV’s YouTube channel from 9pm along with all the previous episodes.