East Riding College and East Riding of Yorkshire Council have collaborated with local employers to develop a new civil engineering course.  The organisations identified a gap in local provision of higher-level HNC qualifications in construction and civil engineering.

Student Tia Ellis has signed a recording contract with East Riding College’s own record label Academy Records.  Tia, aged 17, is a singer and pianist from Bridlington. She started playing the piano at the age of six and has only recently started performing live as a soloist, but is now taking on gigs and performances throughout the region.

East Riding College’s end of year Art and Fashion show Creativity Matters was held in June. Several workshops and classrooms turned into exhibition spaces at the College campus on St Mary’s Walk, showing off a selection of artwork, designs, sculptures, photography and fashion projects produced by the College’s students.

East Riding College is celebrating after being shortlisted at the Association of Accounting Technicians (AAT) Awards.

21st June 2018 - End of year performance draws in the crowds

Students from the performing arts department put on a suberb end of term performance of Rydell High at the Parkway Cinema in Beverley in June.  The 17 students and their tutors worked their socks off to pull together a fantastic performance featuring songs from the musical Grease.

Students at East Riding College recently completed a social action project by teaming up with Healthwatch East Riding of Yorkshire (HWERY).  The research project specifically looked at smoking and students collected 950 responses to their survey before compiling the report. Healthwatch supported the students and published the report as part of a project to help young people take charge of their own health and wellbeing by getting a better understanding of local services and statistics.

East Riding College is celebrating after the Quality Assurance Agency (QAA), the body responsible for assuring the quality of higher education provision, gave the College the highest level of confidence it can bestow upon a provider.

14th May 2018 - Music students organise their own gig in Hull

East Riding College student Wesley Trowell put on a concert at O’Riley’s in Hull with the help of his fellow Music Academy students.  Wesley, 25 from Hull was the mastermind behind the gig and organised and promoted it himself as The Big Music Academy Night Out.

14th May 2018 - Over 70 applications for apprenticeship scheme

Students of East Riding College will once again be holding their annual student conference and exhibition at the Parkway Cinema in Beverley on 11 May at 11am.

East Riding College have come out on top in Government National Achievement Rate rankings for GCSE maths and English. Students at the College achieving grades A* to C in their GCSE maths have placed the College in the top 10% of further education colleges nationally and at number one locally, compared to other further education colleges in the East Riding, the Humber and North Yorkshire.

East Riding College have come out on top in Government National Achievement Rate rankings for apprenticeships.

Travel and Tourism swept the board at the annual East Riding College awards in March. The prestigious ceremony held in the Royal Hall at the famous Bridlington Spa honours students, employers and staff for their outstanding achievements.

Travel and Tourism learners were invited to an industry event in February, where they got the chance to meet a range of TIPTO supplier members and benefited from a range of product updates and training.  They report back on their experiences...

Students from our Level 3 Engineering programme went to visit Rosti Engineering at their Pickering site.  Rosti is a global plastic moulding injection company who manufacture moulded plastics both in the UK and abroad for some of the world's leading brands.  Read one student's blog about their visit... 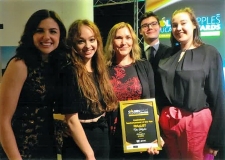 East Riding College health and social care tutor Bev Felgate was honoured at the recent Golden Apples Awards in Hull.  Bev, who is from Tickton and has been teaching at the College for the last 12 years was a finalist for Inspirational Teacher/Lecturer of the Year.  She was nominated by staff and students for her dedication to her students and outstanding performance as both a tutor and mentor.

East Riding College alumnus Anthony Gault, who is now Senior Chef for Hospitality and Banqueting at the University of Hull prepared a banquet for Her Majesty The Queen on her recent visit to Hull.